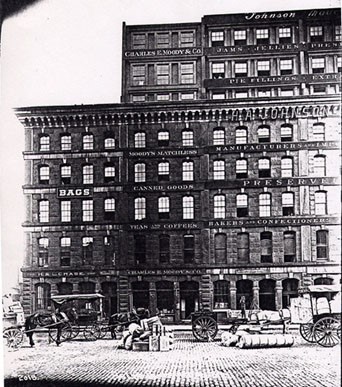 The building housing Harborside Inn was designed as a mercantile structure by Gridley James Fox Bryant, a famous 19th century architect and builder whose projects included Boston's Old City Hall. Renovated as a hotel in 1997, features of the original construction were preserved and highlighted as a reminder of its historic past.

Originally, the building consisted of a number of merchant owned independent bays. The building was originally surrounded by water when ship merchants delivered their goods to the busy port of Boston. Every guest room has architectural details that constantly remind you that you're in a historic building such as the exposed granite, brick walls, extra-high ceilings, and oversized windows.

The Harborside Inn's building was designed by Gridley James Fox Bryant (1816-1899), a famous 19th century architect and builder whose projects included Boston's Old City Hall, one of the additions to the Boston State House, and Rowes Wharf. Bryant used granite from his father's Quincy, Massachusetts quarry to build the mercantile building at 185 State Street. The elder Bryant was involved in the building of the well-known Bunker Hill Monument in Charlestown in 1826. Frustrated by the length of time it took to move granite from Quincy to Charlestown, Bryant developed the country's first commercial railroad, thereby ushering in a new era of transportation for our country.

Located in the heart of historic downtown Boston, the Harborside Inn is perfect for those who appreciate 19th century architecture, a rich history, or just something out of the ordinary.